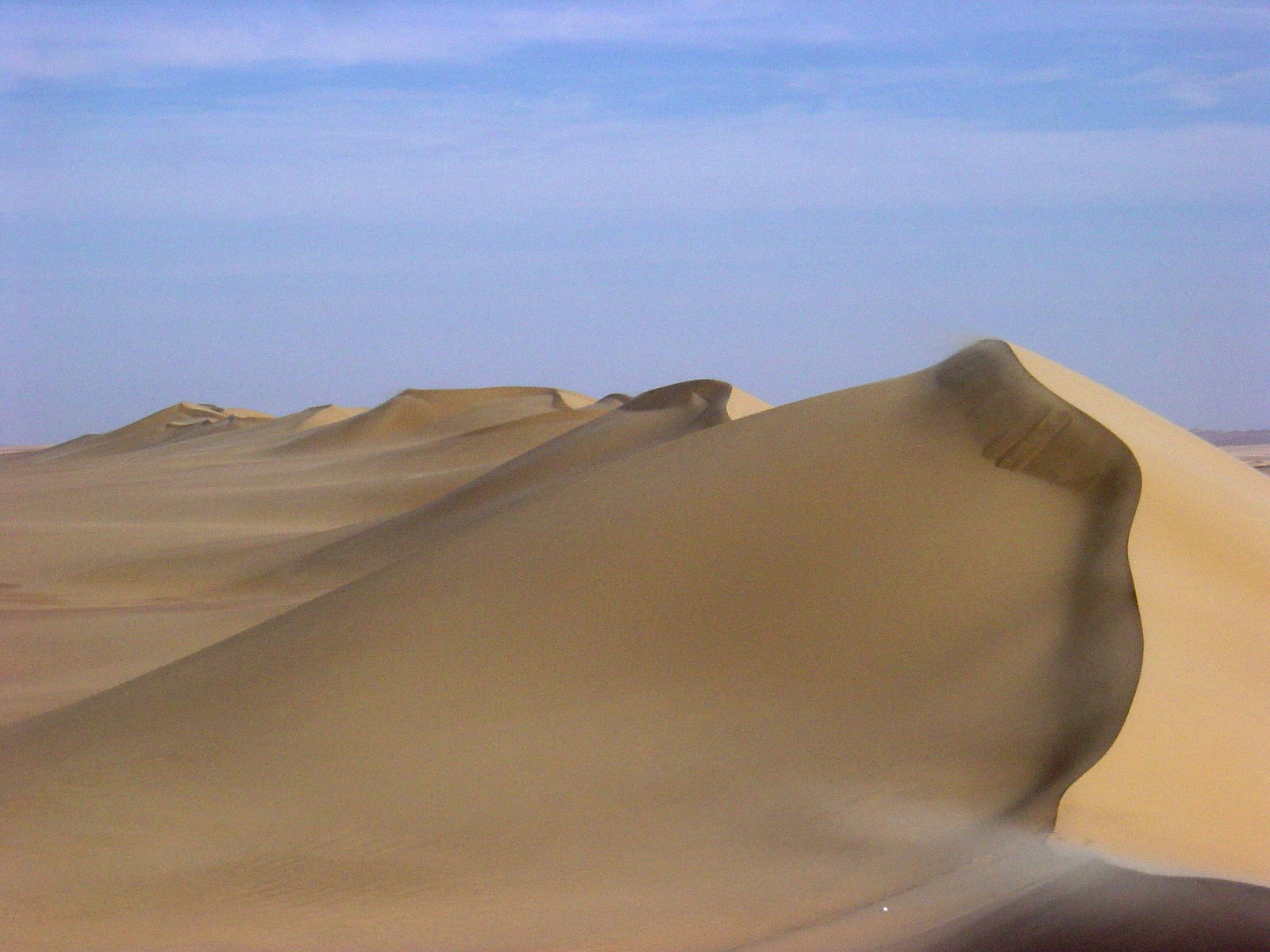 More than 250 million years ago in the Permian Period (the central part of Europe was covered by a big desert not unlike the present day Sahara (picture to the left). During the Permian Period, all the Earth's major landmasses were collected into a single supercontinent known as Pangaea. Pangaea straddled the equator and extended toward the poles, and was surrounded by a single global ocean called Panthalassa.
Life was abundant in the ocean as well as on the coastal plains of Pangaea. However, within the continental interior of Pangaea where central Europe at the time was located, vast regions of desert developed. The climate in these regions was very dry - it hardly ever rained, water was very rare and where found at all, it was mostly in saltwater lakes not unlike the present day Dead Sea.
The landscape was dominated by sand dunes or sand seas, which were moved around by the wind and also by desert plains. Wind-Sculptures could did form, as seen (picture below left) in the present day Sahara, by sand blasting the bedrock, yet creating more sand.
Living conditions for animals (humans were still not around) in this environment was very hard and fossil material from this period in Central Europe is not very common. These desert sands, now buried more than 4000 meters underneath Zehdenick, became the reservoir rock of our present day gas deposits.

At the end of Rotligend time and with the onset of the Zechstein, which is the upper part of the Permian period, seawater flowed into the area and formed a big sea stretching from the east coast of England to in the east Poland covering most of the north part of Europe and Germany (picture below mid). The climate remained hot and dry and the water in the sea evaporated leaving behind salt just like today in the Dead Sea. More than 700-1000 meter of what is called Zechstein salt was deposited in the Zehdenick area. Salt is very tight and it therefore provides a very good seal or roof above the Rotliegendes gas reservoir rock. The Permian period and such the entire Paleozoic era ended with the largest mass extinction in Earth's history, in which nearly 90% of marine species and 70% of terrestrial species disappeared. It would take well into the Triassic and the Mesozoic era for life to recover from this catastrophe. Because so much biodiversity was lost, the recovery of life on Earth took significantly longer than after any other extinction event, possibly up to 10 million years but that is an entirely different story. The aim of our search today is to find the red desert sands (picture below right) deposited in Permian time that now contain natural gas in the pore space. The drilling carried out by Erd-Erdgas-Gommern already in the Seventies found several hundred meters of the Rotliegend sandstone with natural gas below the Zehdenick area. This is not shale gas but a conventional gas deposit and in Germany, natural gas from similar conventional gas deposits has been developed such as Altmark for many decades. The sandstones, in which the natural gas is stored are called reservoir rocks. Generally in Germany these reservoir rocks are found at depths of about 1,500 to 5,000 meters. For comparison: Usable groundwater catches are generally at 0-250 meters. The gas reservoir in Zedenick can be produced with conventional technologies including horizontal well drilling. 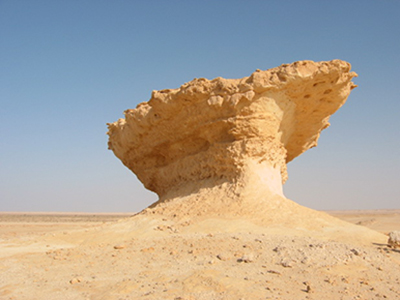 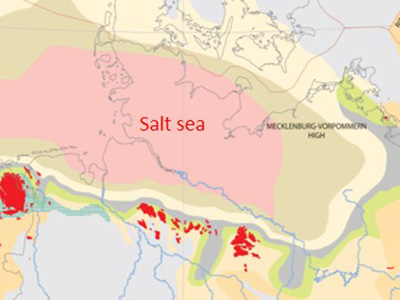 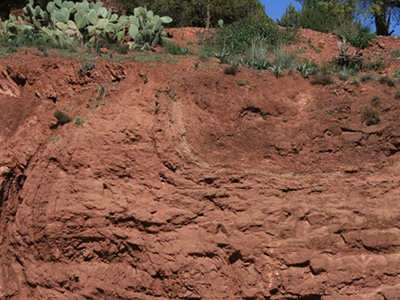 WHERE DOES NATURAL GAS COME FROM ?

All of the natural gas we use today began as prehistoric plants or microscopical animals living in the oceans or in lowland swamp areas. The plants (and animals) absorbed energy from the sun, and stored some of this energy as carbon molecules in their bodies. When they died, they sank to the bottom of the sea or swamps. Over millions of years, layer after layer of sediment was put on top, and as the biomass became buried ever deeper, heat and pressure began to rise and gas generation from the biomaterial started.

The Biomaterial is now called the source rock for the natural gas.  The amount of pressure and the degree of heat, along with the type of biological material, determined if oil or natural gas are generated. Very higher heat or biomass made predominantly of plant material produced natural gas. The biomass related to the source rock for the gas in Zehdenick is plant material deposited in swamps in the Carboniferous period more that 290 million years ago. These turned into coal over time.

WHAT IS A GAS RESERVOIR ?

After natural gas or oil are formed in the source rock, it will be liquid or gas. The tiny pores in the surrounding rock around the source rock are filled with salt water. The generated gas and oil will also try to move into the pores but because gas and oil is lighter than salt water it will start to move up - floating on the water - and if nothing will stop it the gas and oil will eventually come all the way up to the earth surface.

Some oil and natural gas will succeed to move or migrated all the way to the surface and escaped into the air. This is known as natural oil and gas seeps. In other places oil and natural gas migrated upwards until it is stopped under an impermeable layer of rock also called a seal. A seal could be rock salt, clay or any other tight rock. The oil and gas is trapped under the seal and the rock in which the oil or gas is trapped is called the reservoir rock and could be porose sandstone or limestone (picture right of limestone from Stevns Klint, Denmark which is a very good reservoir rock in the north sea). 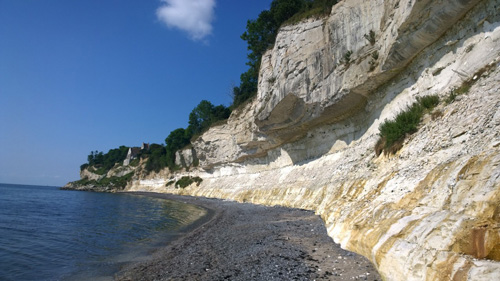